Dennis Martin likes to include results from the ISO 17025 accredited Demartek lab when he speaks at conferences and user group meetings. 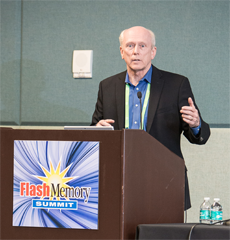 Flash memory is a key technology enabling new designs for many products in the consumer, computer and enterprise markets. The Flash Memory Summit is the only place where you will hear the people making these products happen! Network with companies and people that will create the next generation of hardware and software at the Flash Memory Summit.

Dennis Martin will also present NVMe over Fabrics is Headed Our Way at the Storage Valley Supper Club, Thursday, August 11 at 7 p.m.

How does flash-based storage perform in the real world? Demartek will report on vendor-neutral performance tests run on database and virtualization workloads typical of today’s data centers. The tests cover both hybrid and all-flash storage systems from several manufacturers, using a variety of form factors and interfaces and including both block and file protocols. Attendees will obtain reasonable estimates of what to expect in practice, since the tests are independent and focus on current applications and environments. The results also reveal other advantages of flash-based storage, what the instructor calls “happy side effects”. Demartek will also discuss likely near-term advances. Vendors will learn how their products shape up and where they should put their efforts. 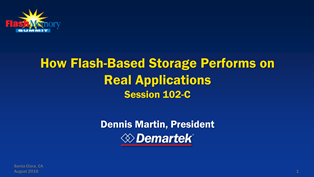 Dennis Martin is the founder and President of Demartek, an analyst firm focused on validation and performance testing of data center products. Demartek has its own fully equipped, modern test lab with the features required to emulate today’s data centers. Its widely recognized reports cover products and technologies from both well-known vendors and startups, including Brocade, Cisco, Dell, EMC, Emulex, Fusion-io, HP, IBM, Intel, NetApp, Nimbus Data, QLogic and others. Demartek also produces popular industry references, including its “Storage Interface Comparison” covering every interface used by storage systems and its “SSD Deployment Guide” that explains everything you need to know to deploy flash-based storage systems in the datacenter. Dennis’ commentary “Horses, Buggies and SSDs” is a must-read for getting the long-term view of flash and other non-volatile storage technologies. Dennis is frequently quoted in the press (in such outlets as TechTarget, Market Watch, and Street Insider) on such topics as best practices for deploying SSD technologies and analyzing performance claims for all-flash arrays. A 36-year veteran of the technology industry, Dennis was previously a Senior Analyst with Evaluator Group and a marketing and engineering executive with StorageTek. He has been a Microsoft storage MVP since 2005.

When he is not deploying, testing, or speaking about SSD technologies, Dennis enjoys playing racquetball. 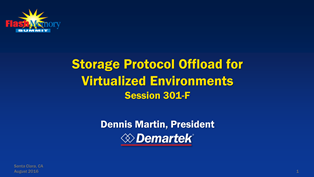 This panel session will include three presentations, including the presentation described below by Dennis Martin. 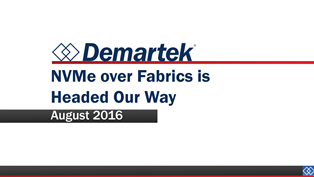 NVMe over Fabrics is Headed Our Way

NVM Express (NVMe) has been gaining traction since it was introduced a few years ago. Although NVMe offers tremendous performance advantages, NVMe is limited to PCI Express bus distances. However, earlier this summer, NVMe over Fabrics was announced, solving the distance problem. Dennis Martin, Demartek President will explain NVMe over Fabrics and some of its features and benefits.

The Flash Memory Summit will be held at:

Click the link to get the complete agenda and registration information for Flash Memory Summit.