I attended the Flash Memory Summit 2014, held in Santa Clara, California. The organizers told me that registration for this year’s annual event was approximately 5000 people, with somewhere in the vicinity of 3500-4000 people attending, which should certainly be considered a success. There were approximately 130 sessions covering a wide range of topics relating to flash memory or future technologies beyond flash memory. 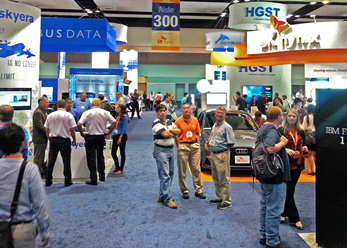 I’ve attended the past few Flash Memory Summits, and have noticed a steady growth in attendance. Although we’ve heard of consolidation in the flash storage market, I was pleasantly surprised to see some new entrants into this field, more than I have seen in previous years. It also felt like there were quite a few new types of technology on display. This tells me that there is plenty of innovation occurring with this market. I saw innovation occurring across the entire spectrum of flash memory technologies, from advances in NAND flash technology, new types of non-volatile memory, flash memory attaching to main memory channels in servers and a variety of hybrid and all-flash array technologies. These innovations fit right into my popular Horses, Buggies and SSDs commentary that I wrote last year.

Another area of innovation is the density of flash memory devices. Enterprise SSDs (drive-form factor) are already larger in capacity than enterprise hard disk drives (10K and 15K RPM). Based on what I saw and heard, I would expect to see this density difference get larger over the next couple of years. Also, expect to see smaller form factors such as 1.8-inch and M.2 devices grow in capacity, as well as other form factors. We are already discussing how many petabytes (PB) of flash will fit into one rack, and I expect this number to grow.

Another recurring theme in several sessions was the emphasis on real-world use cases for flash memory storage. This was especially pleasing to see, since we at Demartek focus our lab validation testing on real-world workloads. I gave a presentation on Real-World Performance on Flash Storage Systems where I showcased about a half-dozen enterprise workloads running on various forms of flash memory in our lab, including server-side and storage-side flash, complete with charts showing performance results. I commented on the importance of application metrics in addition to the storage metrics of IOPS, bandwidth and latency. I also commented on the growing importance of latency and how it is more important than IOPS or bandwidth for many applications. I also covered some of the “happy side effects” of deploying flash storage, including the effects on server CPU utilization and network infrastructure. I also commented on some things that you can expect to see in the near future.

It’s always nice to have Steve Wozniak at this event, as he always has some fun anecdotes and good reminiscing of some of the things he’s done as an engineer over the years. He was quite proud of his 140v nixie tube watch, and he commented on the easy-to-read big digits in the display. He also quipped that if his wife were home at that moment he’d make his Tesla horn honk with his mobile phone, just to let her know that he was thinking about her. He commented that he’s always been a builder and that every company needs some builders who will come up with new things, even if they seem a little bit crazy.

NVM Express (NVMe) was well-represented at this year’s conference. There were a few conference sessions discussing various aspects of NVMe and several companies showed products from several parts of the NVMe infrastructure from low-level components to products that you can buy today. I showed some first-look NVMe performance with a couple of different products in different configurations in my presentation mentioned above. I believe that NVMe will take an important role, and market share, in the next few years, and some of the other analysts who track market share agree. If you’d like to get a nice overview of NVMe and how it reduces latency in the host software stack, you can check our website. I’ll have more to say on this subject later this year. Update: my comments on NVMe from IDF2014 are now available.

I see a very strong adoption of PCIe flash devices over the next few years, with the advent of the M.2 form factor that uses PCIe. The SFF-8639 backplane supports SAS, SATA and PCIe (NVMe) devices in the disk drive form factor, and I expect to see strong growth with this type of backplane in servers. We’ve had such a server in our lab for about a month and have been testing with it. Additional information on the SFF-8639 backplane, including a diagram, is available on our Storage Interface Comparison page. 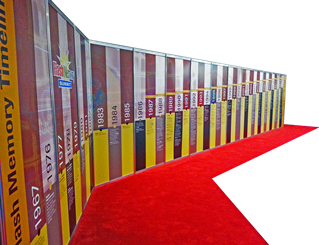 Flash on the Memory Channel

Another big topic at this year’s summit was flash on the memory channel. There are several variations on this theme available today and coming soon. This is an attempt to bridge the latency gap between DRAM and current flash storage implementations. Flash on the memory channel, in combination of NVMe and non-volatile programming methods, has ushered in a new term known as “memory convergence.”

When I started as a software developer in the late 1970’s, I had this vision of software that had instructions and data. I didn’t really want to separate data into memory and storage, where one was fast and volatile, and the other was slow and persistent. I wanted to only be concerned about data and having the correct thing happen to the data behind the scenes. However, I accepted the status quo as a software developer of having to care about memory vs. storage and learned to write software that was aware of this distinction. I’ve been telling this story for a few years now, and have become very excited about non-volatile memory programming, NVMe and flash on the memory channel, as I can see that we’re getting closer to what I originally envisioned many years ago.

There were several sessions on various new types of memory, including several types of NAND flash (such as vertical, 3D and TLC), and new memory types including RRAM (resistive memory), MRAM (including STT-RAM) and PCM (phase change memory). There were some prototypes on the show floor, including a new prototype PCM card that claimed less than 2µs (microsecond) latencies for reads. Storage running at these speeds has all sorts of implications for other technologies, especially networking, host bus adapters and host software stacks.

Those who track semiconductors said that NAND flash still has at least 5-10 years of good development left before it needs to be replaced with something else. The semiconductor industry is highly cost-driven so whatever replaces NAND flash in the future will have to provide better performance or capacity than NAND flash but at lower cost.

As I mentioned, there has been consolidation in this industry over the last couple of years, yet this industry attracts quite a bit of venture capital. John Rotchford from Strategic Advisory Services International said that “Everything is Awesome” with respect to venture funding in this marketplace. He said that this year expected to see more venture capital (VC) funding than previous years, which were also very strong. He said mergers and acquisitions (M&A) activity will remain strong for the next couple of years. He also said that there is a bubble developing here, but not to expect a loud pop. As anecdotal evidence, I asked the cab drivers about traffic in Silicon Valley, and they said that over the last two or three years, traffic has been getting worse, which seems to be an indicator of economic activity.

More than one presenter discussed the pricing of flash used for storage, and how it continues to drop. Some were commenting that external all-flash storage systems were available for approximately $2/GB and that $1/GB was not far away.

There’s currently a place for hybrid devices and arrays, but for the long-term I expect all-flash arrays to continue to gain in market share. Apparently, others have similar views, because “all-flash datacenter” was another term that was expressed more than once at this year’s Flash Memory Summit.

This is a very exciting part of the industry, and I look forward to next year’s event!