Dennis Martin, President of Demartek, includes information shown here in some of his storage presentations. His public speaking schedule is also available.

If you are looking for an industry analyst who has hands-on experience with the products and technologies he speaks and writes about, please contact us.

With Exchange Server 2010, Microsoft has again made several changes to the Extensible Storage Engine (ESE) to increase performance and reduce the frequency of reads and writes. Two of the major changes are to perform fewer, larger and more sequential I/O operations and to increase the page size to 32KB. These changes reduce the number of I/O operations required to access mailbox data and increase the likelihood that data can be accessed in contiguous blocks. A complete explanation of these changes is available on Microsoft TechNet, with links provided in the reference section below.

Reasons for these changes include taking advantage of the superior performance of spinning disk drives with sequential read and write operations compared to random I/O operations, larger numbers of email messages commonly sent and received per day than in the past and an effort to make Exchange Server scale down into environments with less expensive storage infrastructures, including those with JBOD storage.

Exchange Server 2010 provides a unified high availability and site resilience solution known as mailbox resiliency, that uses multiple database copies. The table below refers to the single database copy only.

We are producing deployment guides for some of the technologies described in this document.

For Exchange Server 2010, Microsoft has eliminated the usage of the user profile terms “light”, “medium” and “heavy” to describe the estimated IOPS per mailbox and simply uses a numeric value for the average number of messages sent and received in a day. To see the old definitions for these profiles, see our older Exchange Server 2003 vs. 2007 I/O Comparison Summary page. In order to eliminate confusion and provide a side-by-side comparison of the estimated IOPS for Exchange Server 2003, 2007 and 2010, we have compiled the data provided by Microsoft for each of the three versions of Exchange Server into a single table for comparison. We have also provided some charts that help to visualize these differences.

The IOPS values in the table below can be used for JetStress testing for the appropriate version of JetStress.

The Exchange Server IOPS Trends chart plots all the IOPS and messages per day data from the comparison summary table above. 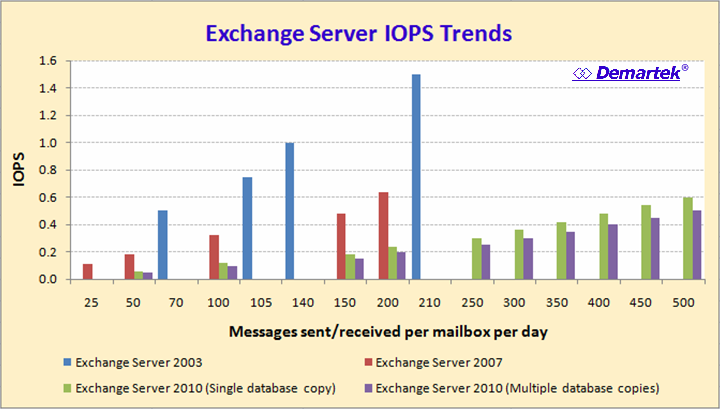 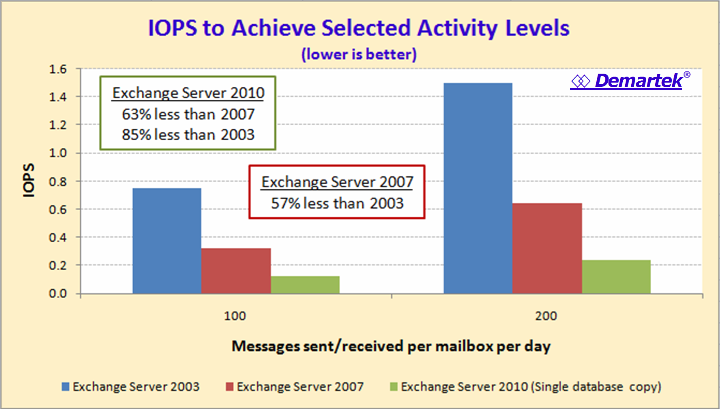 In this next graph, we wanted to determine how many messages per day could be achieved with a particular IOPS value. We chose 0.4 and extrapolated the data, based on the figures provided by Microsoft. Each newer version of Exchange Server supports higher numbers of messages per day at a given IOPS value than for the previous versions. 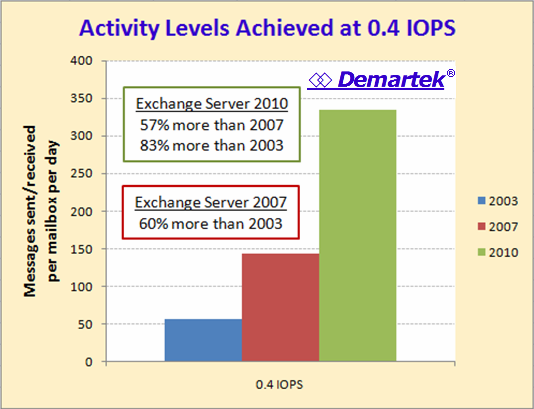 The original version of this page is available at www.demartek.com/Demartek_Exchange_2003_2007_2010_I-O_Comparison_Summary.html on the Demartek website.